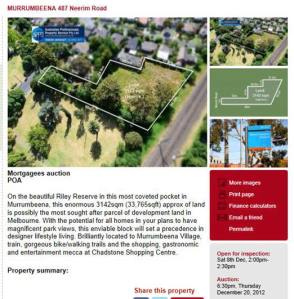 As much as GERA would like to report that Glen Eira Council acquired the rare and unique 3142 sqm open space opportunity at 487 Neerim Road, Murrumbeena, we are unable to.  Regrettably, the property went under the hammer at 6.30 tonight and was passed in at $2.6m with the vendor’s representative being confident the property would be sold later this evening – presumably for high density multi-unit dwellings.  Council was noticeably absent.

Although at less than 20% higher than the top of the quoted sale price of $2.2m, the final negotiated sale price should be well within Council’s range (given the almost $2m paid for 2 Packer Park house lots which were considerably smaller than the Neerim Road property, lacked mature native vegetation and required demolition and rehabilitation works).

acquisition of the property was not mentioned at last Tuesday’s (18/12/2012) Council Meeting (nor was it discussed at any previous ordinary Council Meeting).  Council’s only response has been a letter, from Mayor Hyams (refer to our earlier posting below), outlining the reasons why Council was not considering purchasing property.   No individual Councillor responded.

Council’s failure to consider purchasing the property is another instance where Council’s encouraging words are not matched with corresponding actions.  Since 1998, residents have continually expressed concern over Glen Eira’s lack of public open space and the need to acquire additional open space in both the Community/Council Plan and the State Governments Satisfaction Survey.

In evaluating how well Council has responded to residents clearly expressed and well documented wishes residents should consider the following:

It is interesting to note

The Recreation Land Fund, which was previously created (circa 1998) to set aside funds for parkland purchases is no longer included in Glen Eira accounts.

With the impending new Open Space Strategy review and community consultation residents should again be vocal about their wishes and actively ensure Council adheres to the strategy in coming years.  Unique opportunities such as this particular property should not be let go – they should be actively sought and secured for current and future residents.

The Sold sticker was on the property’s real estate sign this morning.