Posted on May 19, 2014 | Comments Off on ELECTRONIC SCREEN ON PUBLIC PARK AND RECREATION GROUNDS 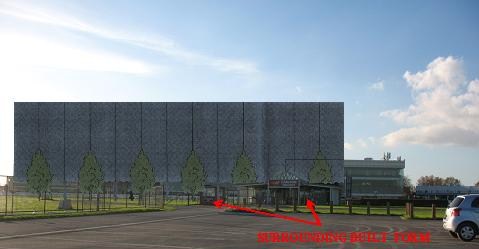 View of the screen from the Centre of the Caulfield Racecourse Reserve picnic facilities.

Last Tuesday’s Council Meeting (20/5/2014) granted approval for the erection of an enormous electronic screen on the Caulfield Racecourse (see below posting). The permanent screen will be located, in front of the grandstand, on  Crown Land that is designated as a public park and recreation area. The screen will be used for live racing feeds on race days (27 pa) and sponsorship promotions during both racing and non-racing events.

Much of the discussion, leading up to the formal vote for screen approval, related to the benefits derived by MRC and race patrons (ie. additional income stream, attractive to grandstand users) rather than the adverse visual impact on the parkland and parkland users.  However, the “major” argument presented for approving the screen was that such approval would remove the MRC’s ability to argue against the future provision of sporting facilities on the Racecourse Centre’s public parkland.

While GERA has reservations re the adoption of this approach, GERA sincerely hopes that approval to permanently erect a screen of this magnitude results in increased sporting facilities in the centre of the racecourse in the near future.

At tomorrow’s Council Meeting, Council will vote on the Melbourne Racing Clubs planning permit application for the permanent installation of a huge electronic screen on Crown Land in an area designated for public parkland and public recreation usage. 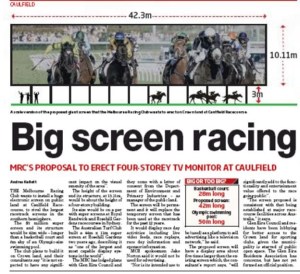 Viewed from the centre of the racecourse picnic area, the visual impact of the screen will be 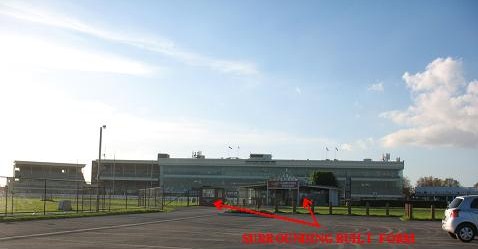 Please note the above picture superimposes the screen diagram (as per documentation presented by the MRC) on the above “before” photo.  Screen positioning is aligned with the pitch of the access tunnel entrance roof.

In support of the planning permit application the MRC comments that

GERA believes that this electronic screen planning permit application should not be granted and that an amended scaled down permit application, that is more appropriate to the reserve’s parkland usage, should be submitted.  GERA considers that

*A  large lot is defined as being a property lot greater than 2000 sqm. 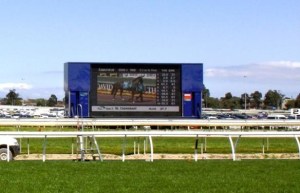 Comments Off on ELECTRONIC SCREEN ON PUBLIC PARK AND RECREATION GROUNDS 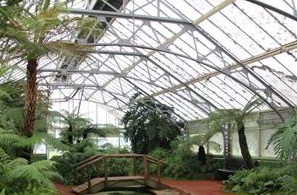 The protest involved residents entering the Council Chamber towards the start of the meeting and chanting, for some 4-5 minutes “SAVE OUR CONSERVATORY”,  then departing.

As stated in our below posting, the 24/9/2013 decision to restore and replant  the conservatory, reflected the view, clearly and consistently, expressed by residents in 4 consultations over a 5 year period (a period in which Conservatory neglect continued).  The last consultation (July, 2013) being an extensive mail out and telephone survey in which residents were asked to rank the various alternative uses – the unambiguous survey results were

The 20/5/2014 decision to remove is primarily based on Council’s estimated cost of restoring and replanting ($120K) being lower than the average cost ($297K) of structural restoration tenders received (an amount of questionable significance in terms of Council’s annual $73+m budget).   Re the removal decision – no community consultation occurred and no information was provided in support of Council’s $120K (restoration and replanting) cost estimate.   Additionally, the comment  “that if residents were aware of the cost when surveyed, the outcome would most likely have been different” (Leader Article 21/5/2014)  lacks foundation and does not acknowledge that, although residents requested cost estimates be provided for the various 2013 survey options presented, none were provided.

The issue of what to do with the  Caulfield Park Conservatory (subject to a Heritage Overlay) has been raised 4 times in the past 4 years. Predominantly the options presented to the community have been restore, remove or convert to café.   Although, each time the community has voted for restore, the conservatory has remained neglected.

o a 3200+ mail out of a pictured survey brochure, which requested residents rank the below alternative options in order of preference

o a telephone survey of 300 residents and
o promoted the survey in prominent locations within Caulfield Park.

Although residents, and the Friends of Caulfield Park, requested cost estimates be provided to enable residents to make informed decisions on the various options, none were provided.

• the most preferred options

o the Conservatory to be repaired and restored, with its gardens replanted (49%)
o the second most preferred option being that the Conservatory be used for a native/sustainable garden (31%).

As a result, Council passed the following motion

That Council:
(a) Note feedback received during consultation process,
(b) Repair and restore the Conservatory and replant its gardens,
(c) Investigate options for community involvement in the restored
Conservatory.

At the last Council Meeting 29/4/2014  (Council Meeting Minutes – Item 9.8), the Caulfield Park Conservatory was raised once again. The Officers Report presented states that the Council Budget provided $120k for restoration of the conservatory and the average of the tenders received for the restoration of the conservatory was $297K.   The explanation for this cost over run was that in “The process of preparing the tender specification and the tender process itself identified additional issues”*, which we believe are predominantly structural and brings into question the costing exercise undertaken to determine the budgeted $120K.

“Options include, but are not limited to:

The motion passed by Council (Moved by Cr. Lipshutz, Seconded by Cr. Delahunty) was

“That Council remove the conservatory and amphitheatre and return both
areas to open space including new plantings with exotic species with an
estimated cost of $140,000”.

For those interested, we also highlight that Council’s DRAFT 2014 Community Engagement Strategy has been published and is available for community consultation (submissions to be lodged 21/5/2014). We encourage all residents to review and make a submission. As per this Draft Strategy,

“Community engagement is about enabling the community and other interested parties to be informed and invited to contribute to Council services, events, strategic plans, issues and projects. Engagement strengthens the community by involving citizens in the democratic process and providing them with opportunities to express their points of view. Participation in civic life is recognised as being central to good health, developing strong and supportive networks and creating a positive community spirit.

By engaging with the community, Council acknowledges the right of citizens to have their say and get involved with local issues that affect them, their family and their community. It also enables Council to meet the needs of the community by ensuring that planning and decision making is based on an understanding of the needs and aspirations of community members”.

• A significant area of the roof structure was found to be supported by the
windows.
• New lintels and steel columns would be required to support the roof.
• Much of the polycarbonate roof sheeting, windows and doors need to be
replaced.
• Existing steel trusses also need structural reinforcement.