The following is a summary of the Planning Conference, chaired by Cr. Delahunty, for the Outdoor Cinema Planning Permit Application

27/1/2015 – The DPC Hearing scheduled for this Thursday (29/1/2015) has been cancelled and is to be replaced with a more appropriate decision making process that involves Councillors and a Council Meeting decision. The  Hearing is to be replaced with a Planning Conference (5/2/2015 @ 6.30 p.m. – Glen Eira Town Hall, Caulfield Cup Room).  As per our previous advice – Council’s policy is to accept and consider all objections received up until the Committee Hearing or Planning Conference (now 5/2/2015), hence residents wishing to object can still do so.

22/1/015 – Delegated Planning Committee (DPC) Hearing to be held on 29/1/2015 at 1.30 p.m.    Council’s policy is to accept all objections received up until the Committee Hearing or Planning Conference, hence residents wishing to object can still do so.

Residents should be extremely concerned about the recent planning permit application signs placed around the Caulfield Racecourse Reserve (CRR) prior to the Christmas/New Year break. Despite the strong criticism, of both the Trustees’ management of the Reserve and the oversight of the Department of Environment and Primary Industry (DEPI), contained in the September, 2014 Auditor General’s Performance Audit of the Caulfield Racecourse Reserve, it appears that the racing industry is seeking to expand its use of the reserve for commercial activities. 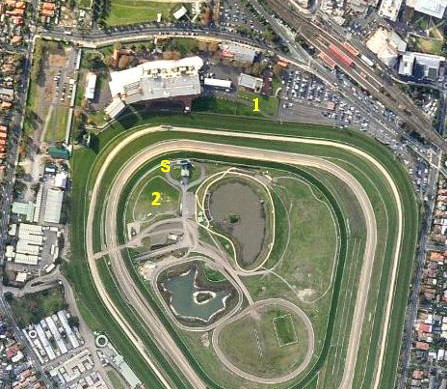 As per the information outlined below, both the Outdoor Cinema and liquor license will/may operate 365 days per year until 1 a.m. and will involve permanent or temporary installation of service facilities.

Of the approximate 54 hectares of land at the reserve:

As a result, the amount of space available for the community is limited and does not equitably meet the community-related purposes in the Crown grant.”

ie public park purpose is 67% vs. public access area of 11% (6 ha) whereas the racecourse purpose is 33% vs. racing usage area of 89% (48ha of which 11 ha is leased and 37 ha without apparent entitlement or  payment or publicly available justification)

“Despite a reported $1.8 million upgrade to the centre of the reserve, public space within the reserve is limited, unwelcoming,  not easy to reach and the recreational facilities are limited.”

Extended Liquor Licence Application – Applicant: Victorian Amateur Turf Club (VATC) for the “supply of liquor in the course of catering for events, social receptions or social functions in premises other than the licensed premises during trading hours”.

Justification for the Cinema Proposal – Prepared by Beveridge Williams on behalf of the MRC.

No documentation re a lease agreement or approval of the CRRT has been provided.

In addition when viewed in the context of the

GERA believes it is inappropriate for Council to make a decision on the application and the application should be held in abeyance until formal unconditional approval is provided by the DEPI and CRRT.