Posted on March 19, 2017 | Comments Off on HELP SAVE McKINNON VILLAGE

At the last Council Meeting (21/3/2017), Council voted to abandon the proposal to

and instead voted to

This change to the proposed zoning, while not acceding to residents request for input into determining the most appropriate zoning (General Residential – 3 stories vs Neighbourhood Residential – 2 astories), does show that Council has acknowledged the concerns expressed by residents.

GERA congratulates both the residents and Council on the decision to abandon the proposed Mixed Use zoning and 4 storey height limit.   In particular, GERA acknowledges Cr. Hyams for his comments on the assistance GERA gave to residents opposing the proposal and for acknowledging the validity of the planning arguments presented, by incorporating them in his reasoning for voting to abandon the original amendment.

Many readers will be aware of a development proposal within the McKinnon Village (a.ka. McKinnon Neighbourhood Centre) that involves re-zoning of a large site that is currently zoned for industrial use to a Mixed Use Zone capped at a height of 4 stories (refer to our Save McKinnon Village posting).  178 residents lodged formal objections to the proposal and 30+ of those objectors attended the recently held planning conference (refer Proposed McKinnon Mixed Use Zone – Planning Conference Report.  Overwhelmingly, the residents found that

The Officer’s Report arising from this planning conference is included the Agenda  for this coming Tuesday’s (21/3/17) Council Meeting (insert link).  Unfortunately, as per the Save McKinnon Village website,

“The planning officer’s report overlooked many of the objections raised including the most basic, ie.  that Council has yet to undertake an objective analysis to determine and justify the most appropriate zoning or height limit  …  the planning officer is recommending that council vote to send this amendment to an independent panel for their recommendation”

The Save McKinnon Group and GERA believe Council, as the elected representatives of the community and the Local Planning Authority, should act in accordance with the residents clearly expressed wishes, as afterall it is frequently claimed that “it is your Planning Scheme”, by

We accept that committing to above will add a further delay to the lengthy planning scheme amendment approval process (which, incidentally, is not subject to the 60 day time limit applicable to large planning permit applications), however, we contend that compared to lasting impact of unacceptable and inappropriate development such delay is minimal.

The Save McKinnon Village folks are appealing for your assistance in lobbing Councillor’s to vote to abandon/reject the proposal before Tuesday’s (21/3/2017) Council Meeting.  A sample email to Councillors and Councillor contact details are available on their website 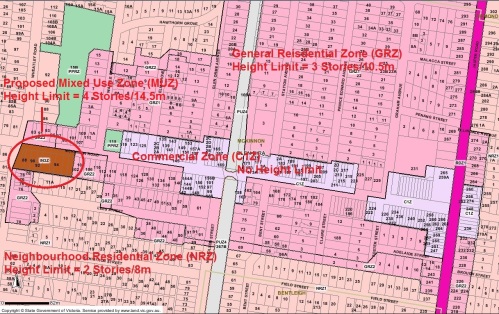