About the City of Glen Eira

The City of Glen Eira was created in December 1994 out of the former cities of Caulfield and (northern part of) Moorabbin.  After initially being run by three Government-appointed Commissioners, the new City elected the first Councillors for Glen Eira in 1997.

For electoral purposes, the City is divided into three wards.  These are: CamdenWard in the North, Tucker Ward in the South, and Rosstown Ward in the centre. The present ward boundaries are shown on the ward map below.

Three councillors are elected to represent each ward (9 Councillors in all), at elections held every four years. The next Council election, via postal voting, is scheduled for Saturday 22 October 2016. Further details may be obtained from the Victorian Electoral Commission

Prior to the casting of postal votes, GERA will hold “MEET THE CANDIDATES”  Community Forums in each of the wards to give residents the opportunity the hear and discuss with candidates (including current incumbents) the issues that confront Glen Eira.  Stay tuned to this website for details 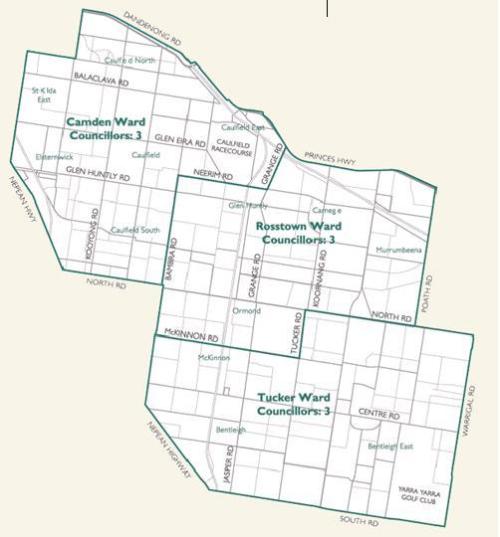