We’ve been contacted by a resident who is concerned that Glen Eira is again likely to lose forever a property of historic and architectural significance.   As per the below Domain article Council has applied to the Minister for Planning for an Interim Heritage Protection Order for the property – GERA applauds Council’s action and hopes that Council has also sought Heritage Victoria’s involvement. 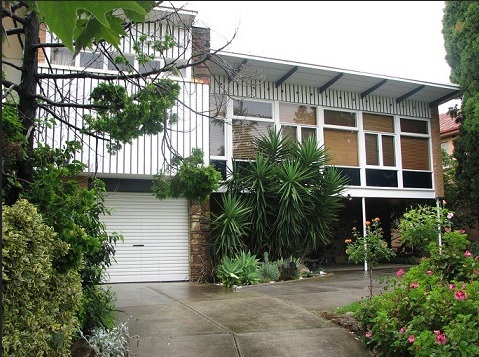 Documentation and pictures supporting the significance of the “Lind House” and Designer Anatol Kagan are presented in article published on the Australian Modern website.

We encourage residents to show support for the preservation of the “Lind House” by emailing the Mayor (MDelahunty@gleneira.vic.gov.au) re Planning Permit GE/PP-30607/2017.

An iconic modernist Caulfield North house is under threat of demolition, prompting the local council to seek an urgent interim protection from the planning minister.

Designers and modernist architecture enthusiasts have taken to social media to express their dismay at the fate of the Lind House, bought last year by a developer for just over $2.1 million.

The five-bedroom house at 450 Dandenong Road was designed by Russian-born architect Anatol Kagan, and is a classic example of mid-century modern architecture.

But locals and design experts fear the property could soon be demolished by its new owner, who applied for planning permit to build eight dwellings in its place.

There are no heritage controls on the property, and the two week public notice for objections ended on Tuesday.

Glen Eira mayor Mary Delahunty moved an urgent motion at a meeting on Tuesday night to write to the planning minister Richard Wynne for interim protection.

“Although a permit would have to be requested for it to be demolished, we really wouldn’t have any grounds to refuse that,” she said.

“I’m just trying to make sure that time is given for a proper assessment to be done of its historical significance so that we don’t get faced with this really unfortunate situation where it might be knocked down at any minute.”

​​Cr Delahunty said a major heritage review was underway and encouraged people to alert the council to other significant properties in the area they might not be aware of.

She said heritage experts would examine the Caulfield North house, and they would take into consideration the advice of other experts of modernist-era architecture.

As pressure mounts to increase density across the city, experts say more post-war homes should also be considered for heritage protection.

When Robin Boyd’s Blott house in Chirnside Park hit the market earlier this year, it also triggered fears the property, without heritage protection, might face the wrecking ball if it sold to a developer.

“When people think about heritage in Melbourne, they often think about Marvellous Melbourne and the gold rush, and the amazing Victorian architecture that we have,” she said. “But what people sometimes forget is that the post-war period in Melbourne was a period of enormous cultural and physical transformation, really of a scale not seen since the gold rush.”

Ms Watson said the heritage system had not caught up with the understanding of the importance of post-war architecture.

“It’s really time to … protect these vulnerable places and do some strategic work to look at that before we lose them,” she said.

“With development pressure increasing and density increasing, all of these places are becoming vulnerable, so we really need to identify which are the best examples that we need to protect.”

Tim Ross, comedian and presenter of TV show Streets of Your Town, said post-war buildings should be given the same respect the terrace houses and California bungalows received.

“Our suburbs should reflect all periods of our history because that’s what gives them their character,” he said.

“Kagan’s work is finally starting to get the recognition that it deserves. We don’t save buildings for today or tomorrow. We save them for 20, 30 years time and beyond.”

Craig Guthrie, a landscape architect and urban designer at Hassell, is also among the experts trying to raise awareness about the potential demolition.

“Melbourne’s growing a lot and we do need to increase density in the inner suburbs, where we have good infrastructure, schools and transport,” he said.

“But we need to protect some of the special places that we have. When 80 per cent of housing is probably mediocre to sometimes poor, we got to keep the good ones.”

A spokesman for Planning Minister Richard Wynne said he had not yet received a request from the Glen Eira Council, and would consider it on its merits if he did.

Comments Off on HELP SAVE LIND HOUSE