Posted on December 15, 2012 | Comments Off on OPEN SPACE – ANOTHER OPPORTUNITY LOST?

Late yesterday, GERA received a letter, from Mayor Jamie Hyams,  in response to our letter (6/12/2012 refer below posting) which

Unfortunately, Council has decided not to purchase 487 Neerim Road, Murrumbeena.   Although located in a minimal change area and a rare opportunity to acquire a sizeable addition to the Municipality’s open space (at approximately 50% of the Melbourne Metropolitan average per capita open space, Glen Eira has the least open space in the metro area), Council argues financial considerations prevent the acquisition of this property.  Hence a valuable open space opportunity will be lost forever to high density development (as emphasised in the below sale advertising material) 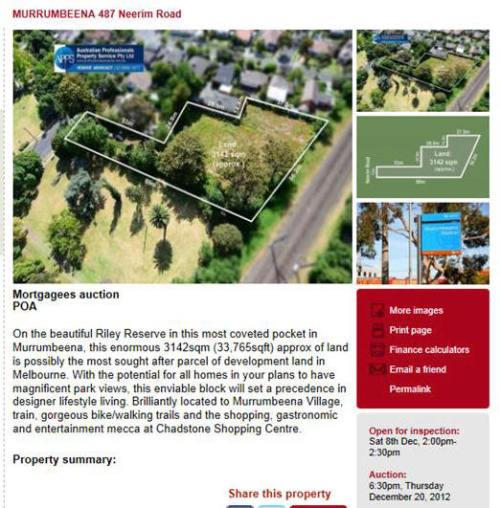 The following is GERA’s response, dated 15/12/2012, to the Mayor’s letter.  The response has been forwarded, via email, to all Glen Eira Councillors.

Thank you for your 14th December, 2012, response to our recent letter (6/12/2012) alerting Council to a rare opportunity to acquire additional parkland (487 Neerim Road, Murrumbeena).  While GERA accepts that Council (like every organisation and individual) has finite resources and needs to prioritise those resources, Council (like every organisation and individual) also needs to retain a degree of flexibility so that unexpected/unplanned opportunities can be capitalised.  For the reasons outlined in our above mentioned letter (copy attached), GERA believes that acquisition of 487 Neerim Road is one such unexpected/unplanned opportunity and requests Council reconsider it’s decision not to purchase the property.

In a point by point response, to your letter (14/12/2012) GERA respectfully submits the following

While GERA does not contest the distinction between our wording of the 2 house lots “adjoining Packer Park” vs. your wording of “jutted in to the park”, GERA points out that the property at 487 Neerim Road is considerably larger than the 2 house lots, has the added benefit of possessing mature native vegetation and additionally is not encumbered by the presence of buildings.  The Neerim Road property estimated price of $2.2m+ therefore compares favourably with the Packer Park house lots (almost $2m) which required demolition and rehabilitation works.  Since the former bowls green at Packer Park was Council property (which it is noted Council originally proposed to sell to fund the acquisition of the 2 house lots), no acquisition costs were incurred.

In the period 2006/8, the Glen Huntly Reservoir was declared surplus to South East Water requirements and an “ïn principle” agreement to transfer the land to Glen Eira Council for conversion to public open space was made.  In March, 2008 (prior to the November, 2008 Council elections) Council held a public consultation on proposed usage at which residents voted overwhelmingly against selling the reservoir site for development and in favour of conversion to parkland.   In 2010, the wheels of government moving slowly, management responsibility (not ownership) for the land was officially transferred to Glen Eira.

While GERA welcomes the addition of this new park, particularly as it is located in the Glenhuntly Housing Diversity (high density) area, GERA recognises that, unlike 487 Neerim Road, acquisition of the reservoir site is a planned opportunity and that the proposed new park will not become a reality for some considerable time.

In relation to the centre of the Caulfield Racecourse, Council’s 2011 agreement with the Melbourne Racing Club appears to have stalled since improvements (eg. removal of the Queens Avenue palisade fencing) have failed to meet their scheduled completion date.

As with Council Advocacy, GERA welcomes and supports the proposed new Open Space Strategy.  Replacement of Council’s 1998 Open Space Strategy is long overdue as, over the past 14 years, the policy has failed to keep pace with Glen Eira’s population growth and the changing needs (re parkland requirements and parkland usage) that accompanies such dramatic population growth.

GERA would welcome the opportunity to further discuss this issue, and the related issue of funding of future open space acquisitions, with Council.

GERA acknowledges that Glen Eira’s limited open space is well maintained and that open space maintenance involves considerable expense.  It should be noted that residents question some of Council’s maintenance decisions (e.g. installation of concrete plinths, pavilion expansions), particularly when the expenses incurred by those decisions are seen to prevent or limit acquisition of additional open space.

The need for flexibility and willingness to take advantage of unexpected open space opportunities, is reflected and highlighted by your mention of the $1.1m Murrumbeena Play Space Project   The Murrumbeena Play Space Project experienced a “leap forward” in the priority list when the unexpected State Government Grant ($259K) was announced and Council was able to unexpectedly provide the additional $850K required.

Repayment of the GESAC loan (budgeted to be $23.4m at the end of the 2012/13 financial year) should be an issue for Council.   However, given

brings into question Council’s focus on GESAC debt reduction at the expense of acquisition the 487 Neerim Road property.

GERA seeks clarification on the $7.1m fund shortfall and its impending payment mentioned in your letter.

The July 2012 fund shortfall announcement was featured in a Glen Eira Leader Article dated 14th August, 2012.  In this article Council spokesman Paul Burke said “Council directors had identified the shortfall risk last year, and had put $3 million into its 10-year Strategic Resource Plan” … He said “$4.1 million now had to be found with the shortfall paid over 15 years”

The clarification GERA seeks is the related to reconciling the significance and urgency applicable to payment of the Defined Benefit Fund shortfall as outlined in your letter and the Leader Article.

In order to remain focussed on relevant issues, GERA will refrain from commenting on the past election campaign matters raised in your letter.  Suffice it to say, that unexpected/unplanned open space acquisitions should not be seen to automatically result in increased rates or rate increases that are higher than expected – particularly in light of the following points:

As mentioned in this letters introduction, Council also needs to retain a degree of flexibility so that unexpected/unplanned opportunities can be capitalised. The closing comment that “Council’s priorities will be to adopt and implement a prioritised and costed plan to meet the communities need for public open space” does not reflect the community’s open space aspirations included in the 2012 Community Plan nor does it reflect unplanned/unexpected nature of open space opportunities.   Without the flexibility and willingness to take advantage of open space opportunities as they become available, Council’s vision is incomplete and the community’s needs will never be met.

GERA looks forward to receiving Council’s response to this letter.

Comments Off on OPEN SPACE – ANOTHER OPPORTUNITY LOST?