Posted on September 18, 2012 | Comments Off on TRANSITION ZONES – THE REALITY

When discussing the interface of a Housing Diversity/High Density Areas with a Minimal Change Area the Minutes of the last Council Meeting (4th September, 2012) – Section 9.1 – includes the following impressive statement*

GERA notes that this Amendment was approved by Council at the 30th August, 2011, Council Meeting and has subsequently been submitted to the Minister of the Department for Planning and Community Development for approval to exhibit.  Ministerial approval is pending.

Bear in mind that 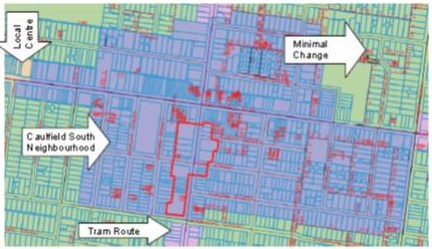 Residents should therefore be extremely concerned about the interface between Housing Diversity/High Density Areas contained in Council Policy.  Policies are guidelines which are referenced by the Planning Scheme.  Policies proliferate in Glen Eira as they are seen as being preferable to Planning Scheme inclusions because they are easier to change+ – this is despite the fact that in its submission to the Independent Planning Panel on the C87 Neighbourhood Character Overlay Planning Scheme Amendment  Council stated that “policy has generally been accorded little weight at VCAT”.

To revert to discussing Amendment C90 – Transition sites in Housing Diversity Areas abutting a Minimal Change Area and how it addresses residents’ long outstanding issues with regards to the Housing Diversity/High Density Areas interface with Minimal Change Areas (ie visual bulk, solar access, traffic and parking, overlooking and noise).  Amendment C90 was outlined in the Council Meeting Minutes of 30th August, 2011 – Section 9.4.  Readers should also note that the policy states that “if approved it would still be (only) a policy and not a control”.

1.      A transition site (housing diversity area) that abuts the minimal change area at the rear of the site (i.e. the back fence is the boundary);

2.      A transition site that is located across the road from a minimal change area (i.e. the road is the boundary);

3.      A transition site where the side of the property forms the boundary line.

The policy also state that’s  “In essence, the policy moves development further away from a minimal change area to reduce visual bulk impacts and increase the ability to incorporate canopy trees on a development site”.  So how does it do this – the answer is simply setbacks, which Council now refers to as transition zones.

GERA would like to go on to discuss how the ancillary issues of visual bulk form (i.e. those elements related to “respectful of the character of the adjoining minimal change area” – materials, eaves, roof  pitch, landscaping, site coverage, proximity to property line) and residents’ other major issues (solar access, traffic and parking, overlooking and noise) are addressed in Amendment C90, however, we are unable to do so because the C90 Amendment does not address these issues.

* Council Minute 4/9/2012, section 9.1 – the report relates to a 4 storey development on the Corner of Howitt and Balaclava Roads, Caulfield North.

A Planning Scheme Amendment can be initiated by the Administration (with or without presentation at an open Council Meeting).  The Amendment is submitted, with an explanatory note to the Minister of Planning and Community Development for approval to exhibit (i.e. present to all the parties who may have an interest in the amendment, or may be affected by it, for comment).  If a submission opposing the amendment are received which Council is unable to resolve, Council may opt for an Independent Planning Panel (appointed by the Minister) to consider, and make a recommendation on, the amendment.  Council is, not bound by the Independent Planning Panel’s recommendation – it may resolve to adopt the amendment, abandon the amendment or adopt the amendment with changes.  Council’s resolution is then submitted to the Minister for approval and gazetted.  The process is long – at least 18 – 24 months, whereas changing a policy is, in comparison, a hey presto alternative (no ministerial approval, limited community input).

Comments Off on TRANSITION ZONES – THE REALITY